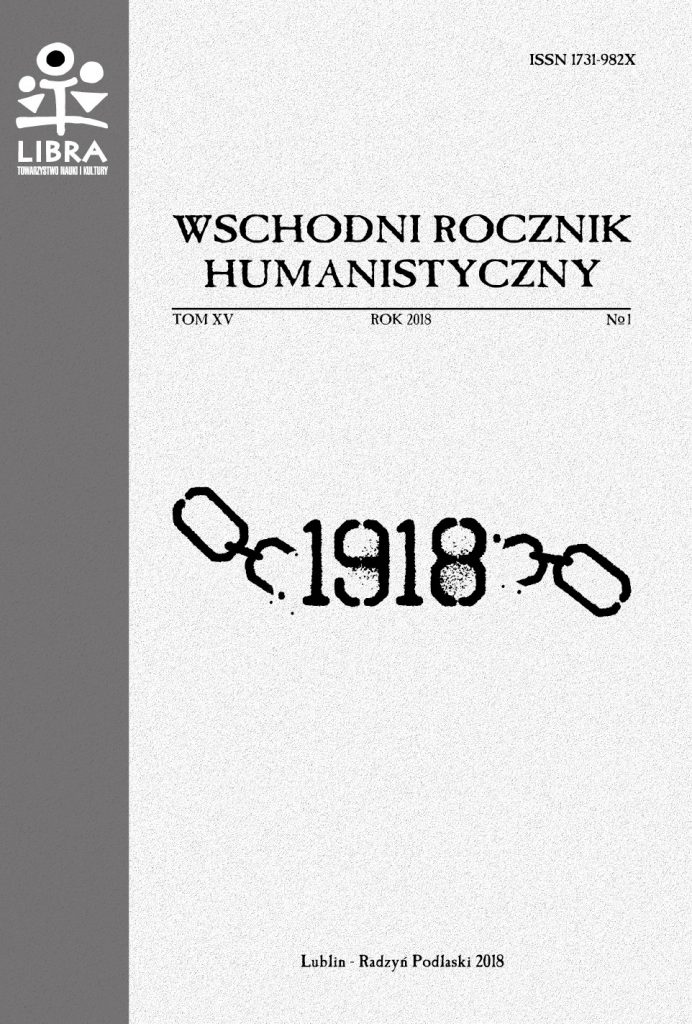 “Smolensk Archives” and royal awards near Smolensk 1610-1611.
Key words: Smolensk, Sigismund III, the Moscow State, boyars, Polish-Lithuanian Commonwealth, Lew Sapieha, Vladislav IV.
Annotation: The article deal with the archival data on the estate giving to Russian gentlemen and noblemen in the military camp of King Sigismund III near Smolensk. The issue is about how the estate giving to Muscovites was provided by the Chancellery of Great Chancellor of Lithuania Leo Sapieha and how possible was the dialogue of two bureaucratic traditions. A special issue is the case of noblemen Rzhevskies; their petitions to the “Czar Wladyslaw” and to Chancellor Sapieha were the most numerous.

Continuity of the traditions of the ancient Orthodox church monody on the example of selected dogmatists of eight modal scales from Lavra and Suprasl Irmologions
Keywords: Śpiew cerkiewny, Irmologion Supraski, Irmologion Ławrowski, formuły melodyczne.
Annotation: In the article the author undertook attempts to prove that the two Orthodox church singing traditions contained in the 16th-century the Lavra Irmologion and the Suprasl Irmologion (1598-1601) by Bogdan Onisimowicz have common roots which are the traditions of singing of Kievan Rus. For this purpose the author compares selected the melodic formulas (popiewki, lica i fity) taken from selected hymns in honor of the Mother of God, the so-called dogmatists. The author attempts to prove the connection of the melodic of the Old Ruthenian church singing with the liturgical texts whose content it comments. The author points to the principle of “similarities” eternally binding in the sacred art of the Middle Ages, where the creator does not rely on his own will, but harmonizes it with the divine rhythm of creation.

The Challenges of caring for the wounded during the Crimean War as a factor in the formation of military-field surgery in Russia (by the letters of Nikolai Ivanovich Pirogov)
Keywords: Nikolai Pirogov, history of medicine, ethics, military operations, medical help, hospitals, wounded patients, nurses (sisters of mercy).
Annotation: The negative results of the Crimean war prompted the government to make large-scale changes in all spheres of society. They also touched upon the field of medicine. The impetus was the views and activities of the famous Russian surgeon, thinker, teacher, public figure N. And. Pirogov during the defense of Sevastopol. H. And. Pirogov noted extremely bad organization of medical business: shortage of personnel (both doctors and Junior medical personnel), lack of tools and medicines, lack of equipped hospitals, inability to carry out normal transportation of patients. Activities carried out by the surgeon: the use of plaster bandages, training of sisters of the Holy cross community of sisters of mercy, the introduction of a new method of care for the wounded, which consists in the fact that they were subject to careful selection at the first dressing station; depending on the severity of injuries, one of them was subject to immediate surgery in the field, and with lighter wounds, evacuated inland for treatment in stationary military hospitals; led to a decrease in mortality and disability among soldiers and officers. Therefore, Pirogov is considered to be the founder of military field surgery.

Displacement from Southern Podlachia to the Kherson and Yekaterinoslav Governorates in the Years 1875–1876
Keywords: Greek Catholic Church, Southern Podlachia, displaced people, religious relations.
Annotation: The article aims to increase knowledge about the opposition of some Greek Catholics from Southern Podlachia to compulsory joining them to the Orthodox Church in the 1870s. There was published a document presenting the basis for the Russian authorities to decide on displacing their leaders to the Kherson and Yekaterinoslav Governorates. Moreover, the list of 310 people transferred to these both Governorates from the Siedlce Governorate in the years 1875–1876, was provided.

The Basilian monastery in Lublin in nineteenth century
Keywords: Basilian monastery, Greek Catholic church, union of the Brest region, eastern monasticism, Polish Kingdom.
Annotation: Basilian monastery in Lublin was founded in 1695 as a result of the adoption of the Union of Brest by Orthodox monks. Its headquarters was located at the edge of the Czwartek district on Ruska street. Due to the very low number of parishioners, the monks were engaged in the pastoral care of prisoners and soldiers. The necessary funds were obtained from leases: buildings, inns, squares and field lands. The final end to the religious community put the decision on dissolution in 1864. Issued by Alexander II.

Father Augustine Jakubisiak – a word about a forgotten Polish thinker and research on his legacy.
Key words: the Polish Library in Paris, the interwar period, individualism, concretism, Polish thought in emigration, ontology, the Polish Foreign Abroad University, freedom.
Annotation: The article is a review of the results of research regarding priest Augustyn Jakubisiak, underwent in the archives of the Polish Library in Paris, that functions at the Société historique et littéraire polonaise. Moreover, I discuss here actual research about life, work and heritage of this polish priest, philosopher and theologist. It turns out that Jakubisiak, during his lifetime, was recognized as an outstanding thinker (he was granted with the French Academy prize for his work about time and space), but not long after passing out, he got forgotten due to the socio-political situation. Given the richness and complexity of his work, let alone its influence on society and intelligentsia on that time, his thought is the one that requires some deep revision, especially in the field of interdisciplinary research.

Tasks of Polish United Workers’ Party in the voivodeship of Biała Podlaska during martial law and first results of their implementation (December 1981 – March 1982).
Key words: communist party, martial law, Poland, Polish United Workers’ Party.
Annotation: At the moment of introducing martial law in Poland, local structures of communist party were in the state of internal decay due to the lack of ideals, indiscipline, contradictions and conflicts. Therefore it provided a perfect opportunity to consolidate the party and redress the situation within it. The plan of its repair had been worked out earlier, long before introducing the martial law. On December 10, 1981, the secret instruction on how to manage the party during martial law was directed to the PZPR’s local structures. The leading instrument included in the instruction was directive management, which involved an absolute obedience to the orders of higher courts. Additionally, a number of other solutions were provided to restore discipline within the party. The presented documents show actions aiming at repairing the situation within the communist party in the Biała Podlaska Voivodeship and their results over the period from December 1981 to March 1982.

Sworn Translator of East Slavic Languages in the Legal and Economic Perspectives.
Keywords: sworn translator, certified translations, translation theory, Ministry of Justice, person of a public trust, East Slavic languages, judicial authorities, attestations, source document, public administration.
Annotation: This article explores the legal and economic situation which arose several years ago, has been developing for this time and in which sworn translators and interpreters are placed today. Description of these circumstances is based not only on currently binding documents but also on several out-of-date papers. The author of this article emphasizes the fact that Polish Ministry of Justice (the administration of justice) and the Ministry of Finance should give more attention to the subject specialists and the problems they are confronted with in their careers. In particular, the scholar focuses on sworn translators and interpreters of Russian, Ukrainian and Belarussian languages by providing details on problems they face on a daily basis when delivering sworn (certified) services not only to public bodies, e.g. ministry, judiciary, prosecutor’s office, public administration, local government, etc., but also to business entities, e.g. companies, partnerships, translation offices, etc., and individual customers. Sworn translators and interpreters of other languages, indeed, also face a great number of problems this article explores. However, in the Polish legal system, west European languages seem to be paid closer attention than the east European ones.

The Swedish-Russian border in the modern era, comments on the book by Adrian Selin.
Keywords: Russia, Sweden, XVII century, Adrian Selin.
Annotation: The border between Russia and Sweden in the modern era ran through the Finnish, Estonian and Latvian territories. The wealth of archival and epigraphic materials gave Adrian Selin the opportunity to prepare a book that deals with many topics, in the field of political history, material history and the history of mentalities.

Powered by WordPress and WordPress Theme created with Artisteer.